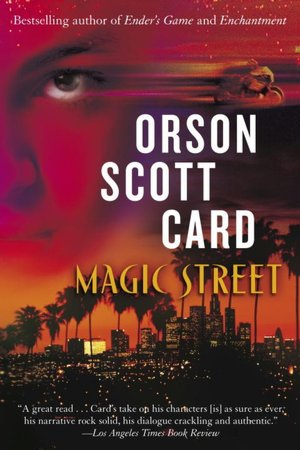 From the very start, Mack Street was different. As an infant, he was found abandoned in an L.A. park. Barely surviving at first, he was raised by a single mother, a sullen, terse woman who never understood her adopted son. Everyone in their prosperous, peaceful African-American neighborhood regarded Mack as strange, even perhaps a bit crazy. They gossiped about his penchant for staring off into space. What they didn't realize was that Mack Street wasn't exactly dreaming; he was dreaming other people's dreams... Orson Scott Card has the distinction of having swept both the Hugo and Nebula Awards in two consecutive years with his amazing novels Ender’s Game and Speaker for the Dead. For a body of work that ranges from science fiction to nonfiction to plays, Card has been recognized as an author who provides vivid, colorful glimpses between the world we know and worlds we can only imagine. In a peaceful, prosperous African American neighborhood in Los Angeles, Mack Street is a mystery child who has somehow found a home. Discovered abandoned in an overgrown park, raised by a blunt-speaking single woman, Mack comes and goes from family to family -- a boy who is at once surrounded by boisterous characters and deeply alone. But while Mack senses that he is different from most and knows that he has strange powers, he cannot possibly understand how unusual he is until the day he sees, in a thin slice of space, a narrow house. Beyond it is a backyard -- and an entryway into an extraordinary world stretching off into an exotic distance of geography, history, and magic. Passing through the skinny house that no one else can see, Mack is plunged into a realm where time and reality are skewed, a place where what Mack does and sees seem to have strange affects in the "real world" of concrete, cars, commerce, and conflict. Growing into a tall, powerful young man, pursuing a forbidden relationship, and using Shakespeare’s Midsummer’s Night Dream as a guide into the vast, timeless fantasy world, Mack becomes a player in an epic drama. Understanding this drama is Mack’s challenge. His reward, if he can survive the trip, is discovering not only who he really is . . . but why he exists. Both a novel of constantly surprising entertainment and a tale of breathtaking literary power, Magic Street is a masterwork from a supremely gifted, utterly original American writer–a novel that uses realism and fantasy to delight, challenge, and satisfy on the most profound levels.